Staff, students and community members joined together on Thursday, March 11th to celebrate the birthday of Mrs. Doris Ross Reddick for whom the school was named.

Greeted by news media, Mrs. Reddick and her family, along with district board members and administrators, spent a few minutes reflecting on her long career in Hillsborough County as an educator and as a school board member.  Mrs. Reddick began her teaching career in 1947 as a substitute teacher and eventually teaching full time at Dunbar, Meacham and College Hill Elementary Schools.  She served as a resource teacher, a Reading Specialist, program supervisor of Early Childhood Learning Centers, and later became the first Black Learning Specialist & Assistant Principal.  In addition to her full-time career, she also spent time teaching evening adult classes, lecturing at HCC and at USF, and she was instrumental in the development of the HCPS Head Start and kindergarten programs.

Elected to the School Board in 1992, Mrs. Reddick became the first Black woman to hold that position and serve as the chair.  She served three terms that totaled twelve years, and during her tenure, she was a voice for all children and helped increase the annual minority business allocations and contracts.

The celebration opened with a greeting from Superintendent, Addison Davis, and included musical and poem presentations in Spanish by the students in the Reddick Dual-Language program, congratulations from school board members Lynn Gray, Melissa Snively and Henry “Shake” Washington, and a tribute from daughter Clemmie Perry.  She was presented with flowers and hand-made cards, and principal Dr. Jennifer Dames read from a proclamation that “be it resolved that March 13th will now, and forevermore, be recognized as Doris Ross Reddick Day here at Reddick Elementary School, and all who celebrate will reflect on the contributions Mrs. Reddick has made to education and emulate the love she express to one and all.”  Videos of the celebration can be viewed here. 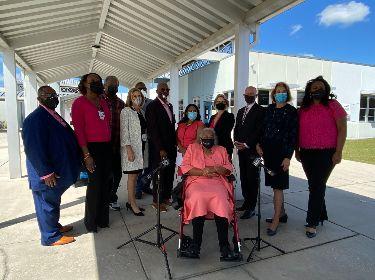 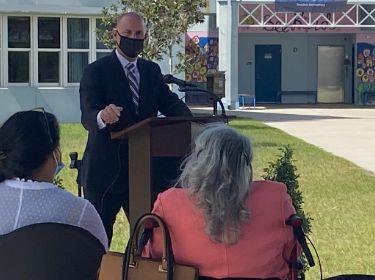 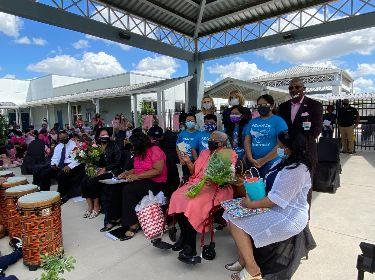